I assume most readers are quite familiar with Cindy Crabb and her incomparable zine, Doris. Always cited as a perennial favorite, it’s not an overstatement to say that it’s one of the most important and influential fanzines ever written. I recently bought The Encyclopedia of Doris and this quote from the back cover really nails it better than I could: “Crabb writes with an inspiring level of honesty and compassion, exploring subjects like consent, feminism, abortion, death, self-image, creativity, shyness, queer identity, addiction and anarchism in ways that embrace complexities.” In this issue Cindy surveys the institutional nature of racism and white privilege by looking at her own upbringing and background. Cindy has decided to donate 5% of her income to organizations run by people of color and she asks others to do the same. There’s also some interesting writing on vegetarianism and the romanticization of hunting; her recent reading list (bell hooks, Jamaica Kincaid, Kiese Laymon), and a piece on travel and escape.

This is a “conversation zine” (what a great format!) on the topic of freelance, i.e. precarious work. It’s “the amalgamation of many conversations that have happened in our house and with our friends”. Both authors have ample experience working freelance gigs and this accessible zine documents some of their economic, emotional and sociopolitical views towards unpaid labour. They expertly scrutinize the notion that freelancing means you “get to be your own boss”. As is noted, if you don’t have control over the means of production, you have neither autonomy nor freedom. Emily and Kaley also point out how much unpaid work has to be done before you can actually get paid. I especially enjoyed the section that scrutinized the media scripted obsession with “the entrepreneurial spirit” and cast it for what it really is: a way to disguise how destructive our constructed economy has become. The zine’s final section offers some modest alternatives to what we have now: hyper-individualism and the use of a whole generation of workers as economic widgets. There are also some cool web resources dealing with unpaid labour and young workers. 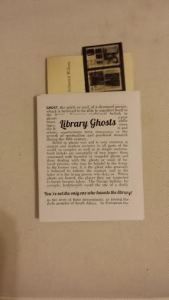 This adorable one pager is filled with drawings of ghosts that haunt the library. What’s not to love here? The pairing of two of my favourite things: libraries and the supernatural! Briefly profiled are the microfilm ghost, the card catalogue ghost, the rubber stamp ghost, and the outdated globe ghost. Also included with the zine was a strip of microfilm and an old catalogue card. As the zine states “You’re not the only one who haunts the library!”. A quick and fun read.

Interesting zine. According to the editor’s website, “LTLE is a zine that makes space for incoherent and unfeasibly specific ideas/words via the format of letters to the editor.” As the author notes, “these days, letters to the editor pages seem to be as anachronistic as the newspapers in which they first appeared”. Nowadays, writing a letter to the editor is an act of profound patience. It’s a ritualistic, almost ceremonial process of wait-and-see. Will your letter make it to print? Who else has been moved enough or is simply bored enough to write to this newspaper editor as well? At this point most of us favour the immediate gratification of a comment thread. But as one letter writer notes, Facebook isn’t the best platform for earnestness or decompression. There’s 10 letters in total, of varying length and tone and they’re set in a striking cut and paste design with strong visual contrast. The writing is often abstract, yet still grounded, and that makes for a thought-provoking read.

This issue of Piltdownlad “documents the rise and fall” of Dessaint’s micro-press, Phony Lid and his “misadventures in the publishing underground”. In many ways this zine is as much a chronicle of his on-again-off-again relationship with a woman named “N”. It’s also a bit of a travelogue, and in a few ways it reminded me of Pete Jordan’s Dishwasher. This is the first issue of Piltdownlad that I have read, but it won’t be the last. The writing is crisp and Dessaint’s unflinching honesty regarding his younger, less prudent self makes it a fascinating read. The Kelly who is narrating the story is a long distance from the character we are reading about. I love the autobiographical nature of perzines, don’t get me wrong, but sometimes it feels as if I’m reading a vanity diary or a laundry list of underdeveloped story ideas. Suffice to say, they can be a bit trickier to execute than myriad other zine formats, say the comp zine, or the standard fanzine about a band or artist. Kelly has clearly mastered the perzine format and is challenging its boundaries and limitations in interesting ways. The writing negotiates a fascinating curve between short story, biography and journaling. During the action Kelly works a lot of jobs all the while fighting evictions, and trying patch up his relationship with N while still putting out issues of his fledgling literary zine, Vagabond.  This issue of Piltdownlad is an entertaining walk down memory lane into an earlier “age of zines”: The late 1990s. This is the first installment of the Phony Lid biography, can’t wait to read the next.

The Stay at Home Girlfriend is filled with self-help tools, art making tips and lots of “cat love”. The zine is also loaded with great vegan recipes. In this issue, Kendy and her boyfriend Matt adopt a stray cat, or to be more precise, Mady the kitten adopts them. This zine is a bit like a comp in that the content is quite mixed. Kendy has challenged herself to write for 20-30 minutes a day and a few of the short pieces are introspective and diary-like. My favourite feature was the interview with Operation Icing: a vegan baking non-profit which donates its proceeds to animal rescue and animal sanctuary services. There’s also a “Vegan Friendly Guide to NY” where fellow zinester, Maude (Marmalade Umlaut) gives us the run-down on the best place for vegan baked goods, the best restaurants, and the coolest place to grab coffee. Looking forward to seeing Kendy’s upcoming comp where she compiles many of her recipes. As she says, her goal is to show how easy and affordable vegan cooking really is.

What a treat it was to receive this in the mail. I’ve seen DIY tarot cards and even zine sports cards, but I’ve never seen anything quite like this before. A set of five beautifully designed collectible trading cards offer a brief biography of renowned and lesser known astronomers. The drawings are well rendered and the cards are richly coloured. In a note accompanying this set, the creator says they “are about fandom, inquiry and feminism”. The scientists that are included in this selection are: Johannes Kepler, Maria Mitchell, Etienne Trouvelot, Anders Angstrom, and most interestingly in my opinion, Aglaonike of Thessaly. As her card states, history has barely preserved her name, but her “eminence in the esoteric tradition of lunar astronomy was so awe-inspiring it attracted the attention of Plato and Plutarch”. The scientist bios are dense, not much more than a hundred words each, but they are well written and serve as bait that entices the reader to find out more about these brilliant thinkers. A few minutes after looking at the cards, I was reading about how Trouvelot fled Napoleon’s coup d’etat, or how Maria Mitchell opened a non-segregated school when she was just seventeen years old.