This issue of long running perzine Basic Paper Airplane focusses on Joshua’s love of the typewriter. It’s a feeling I’m sure many of us share. As Joshua notes, we are not alone. “By the 1800s, over fifty different people had patented some kind of mechanical writing device…their names ranged from ‘Phonetic Writer’ and ‘Printing Machine’ to ‘Pterotype’ and ‘Raphigraphe”. Joshua draws on a plethora of books on the history of the typewriter, and its evolution is more meanderingly complex than one might first assume. This zine is filled with interesting facts about the invention and evolution of many different “mechanical writing devices”, which are shockingly diverse in form and function. Nietzsche’s famous “writing ball” typewriter “looks like a metal pin cushion and weighed 175 pounds”. The last portion of the zine details Joshua’s growing typewriter collection, which includes a manual Olivetta Underwood, a manual Remington Rand Model 17, an electric Smith-Corona Super 12, and a Brother 100, among several others. The zine concludes with a profound analysis of some the social and economic effects this new technology had on the workplace, and workforce, particularly how it contributed to a division of labour along gendered lines. Basic Paper Airplane #9 is a compelling sociological analysis that touches on gender and labour issues as well as art, design, history and politics. As he did in his excellent, Prince Zine, Joshua uses a seemingly straightforward subject as a fulcrum to examine broader and more complex anthropological issues.

It’s always a happy day when I spy a new issue of Cometbus on the shelf. I’m sure most readers are already familiar with this storied zine, if not, it’s worth checking out. The last few issues have all been top-shelf, #54: the “In China with Green Day” issue seems to be the most cited, but this is my favourite issue I’ve read since #51, which chronicled the used booksellers of Telegraph Avenue in Berkeley with such rich and splendid insight and detail. This issue focusses on one of my, and I’m sure your, most beloved topics: the used book trade. As usual, we are introduced to a motley crue of assorted golden hearted misfits. There’s Adam and Byron, Omar and Gnarly, and of course the Kerouac-obsessed hippie, Mack. You’ll feel a bit like a fly-on-the-wall while reading this, there are tons of little fascinating intricacies about running a used bookstore, and the world of NYC used book hustlers and pushers in general. My favourite bits were the booksellers’ silent code of conduct, and Aaron’s hilarious take on the dollar rack. Highly recommended as usual.

This is the first issue of Deafula we’ve read, and we’re hooked! The zine’s website states that in Deafula, Kerri “traces her experiences as a deaf person in a hearing world. Simultaneously humorous and serious, Deafula is an informative resource for hearing allies, while still being relatable for anyone who has ever felt like an outcast.” This issue is titled “The Relationship Issue” and features an interview with Kerri’s husband, Andy. Kerri and Andy confront ableism in both personal and systemic terms. The first portion of the zine focuses on “what it’s like being a deaf person married to a hearing person”. In the second half, there’s an airport sequence that had me gripping this zine so tightly, I nearly ripped it in half. There is also a lot of optimistic, yet frank writing on some of the inherent challenges that must be navigated in order to maintain and foster relationships that are continually evolving and growing in positive ways. This is a profound and unique zine. Highly recommended. 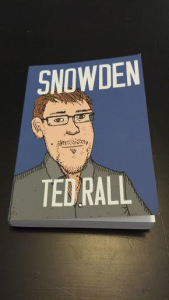 This is a must read graphic novel by columnist and syndicated editorial cartoonist, Ted Rall. Rall uses George Orwell’s 1984 as a starting reference point, to draw comparisons between Orwell’s “paranoid state, constantly at war and obsessed with terrorism, one that exploits new technology to watch its subjects every move”, and our current post Snowden, post WikiLeaks consciousness. The similarities abound with horrifying regularity.

Because of Edward Snowden’s numerous disclosures, we learned that the US Government had spent billions of tax dollars to build “the most sophisticated, wide-ranging, and intrusive surveillance apparatus ever conceived”. This is a well researched biography of Snowden, and readers will no doubt learn some interesting new facts about this young and certifiably brilliant whistleblower, most of which are routinely ignored by the mainstream new outlets. Rall reconstructs Snowden’s complete trajectory in a straightforward, logical manner, and to my mind, it is the most comprehensive and accurate account of Edward Snowden’s intentions and motivations to date.

Nevertheless, this graphic novel isn’t overly preoccupied with Snowden’s biography, rather Ted Rall’s thesis is more a series of questions that drive his examination. “When 1.4 million Americans had ‘Top Security Clearance’ in 2011, which gave them access to many of the same documents as Edward Snowden. Why didn’t they speak up about these programs? Why did Snowden? Why him? Why nobody else? Few of his colleagues cared that they were trampling on basic rights. Why did he?”

Rall is in top form as he blends biography, political intrigue and current affairs in this stranger than fiction story. This is a skillful and insightful survey of Snowden’s complex and amazing journey. Some of his choices have changed the course of history and led him to become simultaneously, “the world’s most wanted cybercriminal, and its biggest hero”. As Rall points out public approval of The NSA has plummeted since the revelations, “at the time of the leaks 56% of Americans polled said they approved of the NSA, by late 2014, 80% disapproved”.

This is an urgent, important book. A decisive call to action, it’s meant to prompt and motivate the thinking, critical, reader to delve past all the obfuscation and acknowledge certain truths that are uncomfortable but necessary. 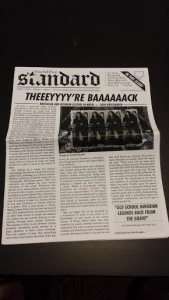 Printed as a mock newspaper, this zine contains several thorough interviews. Some of the subjects: illustrator and zinester, Chelsea Watt, Steve Horvath (Howlin’ Zine), Prashant Gopal (Yo Sick Zine), graffiti writer Kizmet, and England based stencil artist Pahnl. The interviews are bookended by two articles, the first, by Dave Kristiansen critiques nostalgia and reunion culture in metal, and bemoans how many older acts are being trotted out on tour to cash in on the popularity of heavy metal culture while fresh new acts can’t elbow their way in. The final page is a “Vancouver Scene Report” by Anthony Ferrari. It’s a cheeky and provocative indictment of the monetization of heavy metal culture by profit driven labels and the mainstream media.

Editor Craig Lewis has been involved with the punk scene in one way or another since 1988. He discloses in his introduction that he has lived with chronic mental illness for many years, and has lost count of the number of times someone has called him “crazy”. He named the book “You’re Crazy” in part to reclaim that demeaning expression and hopes “the people reading these stories will be allies in destroying stigma attached to mental health and recovery”, and “to know that we can be punk rockers and we can also take care of ourselves and find proactive and helpful ways of managing our mental health”.

There are 25 contributors in total, so we can’t touch on them all, instead we’ll offer a few highlights of some of the articles. One of the strongest personal essays was “My Life with Depression” by Ben Smart. Ben is decidedly “critical of hard-core and punk as a social movement or subculture”, but he notes that DIY organizing was a crucial means of finding likeminded allies for him. He calls out the lack of positive role models for people living with mental illness, he also refreshingly acknowledges his privilege being a straight white English speaking male, and supports how much more difficult recovery would be if he had to confront duelling modes of oppression, such a racism, sexism or ableism on a daily basis.

Calvin Chaos walks us through his struggles with bipolar disorder and panic disorder. He cites CBT (Cognitive Behavioral Therapy) as one of the main tools he employs to help manage his progress.

Catherine Earnshaw examines “the connections between music and mental illness”, while Christina illuminates some of the challenges to accessing treatment for bipolar disorder. In New Hampshire where she lives, doctors can deny to see you if they deem you “too risky”. Um, that defies logic… She points out that besides just relying on Professor Google, finding the prestigious academic publications that deal with your sickness and learning about the language, the research and the drugs used in treatment is an empowering and practical step.

There are also some courageous pieces by Jessica Rosengrant, Kristin Sarette, Synthia Nicole, Matt Hollander, Jim Martin and Maija Sarkkama, just to name a few. One recurrent theme throughout much of the writing, is the importance of self education, not in place of professional care in most cases, but usually to help guide treatment. Of course there are examples of uncaring or incompetent mental heath care workers throughout, but I really appreciate that the editor didn’t try to reach any overarching thesis but instead allowed each author to recount and reflect on their own individual and often disparate experiences. There isn’t a preachy or sanctimonious sentence in the book. Illuminating read from first to final page.