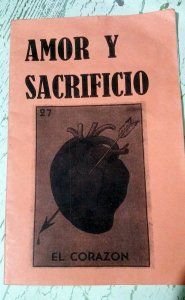 A zine about love and sacrifice. Part of the pain and continued intolerance that will seem even more paramount with the outcome from the US election. Amor Y Sacrificio delves into the experiences of crossing borders for a new life and the effect it has on the next generation. To live in fear when entering a country undocumented, and the risks taken. To lose everything and yet contribute so much. The pages are cut and pasted, each one laid out like a scrapbook full of symbols and real life stories. An amulet of facts about being undocumented and the human rights that are taken away. It is an eye opening account on the detention system in the States and the sickening stories of human rights violations. Go to Friends First to learn more about their cause. This zine is available through Brown Recluse Distro, & Stay Kind Distro.  (Reviewed by Abbie Foxton) 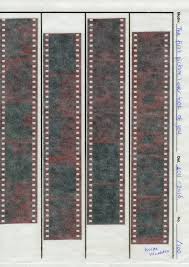 The First Picture I Ever Took of You
By Isolde Woudstra
Half Size, 32pgs
Isoldewoudstra.com

The First Picture I Ever Took of You is a scrapbook-like photo zine showcasing the first pictures Isolde ever took of Grimes, Chelsea Wolfe, The War On Drugs, Lebanon Hanover, TR/ST and numerous other musicians. The photos are crisp and evocative in tone. Isolde’s well composed pictures capture routine, yet vulnerable moments in her subject’s lives. The lack of adornment and use of subtle yet deliberate styling allows for a fly on the wall perspective, and the viewer becomes immersed into the scene. In the brief intro to this captivating zine, Isolde notes that photographers are expected to only show their best work, and after scrolling online through an endless stream of amazing photography that was carefully selected and processed, Isolde was left longing for something more real, more honest. The First picture I Ever Took of You is refreshingly real and honest in both its aim and execution. (Reviewed by JC) 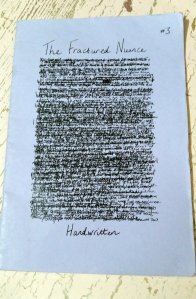 Issue 3 of The Fractured Nuance, delves into the allure of the handwritten. Poetry and stories in the writers own hand, complete with scribbles, revealing even more about the contributors than a fonts list can. Some have copperplate calligraphy holding firm the words on cursive. There is a great little story on nibs and eating writing implements. Loads of slogans, cartoons & poems. Comments hit alone with upper and lower case punches. Fast and determined, diary like, puzzles and mad doodles. Mistakes, different paper photocopied backdrops, this has a relaxed fun feel, when thoughts flows straight through the ink instead of keys. (Reviewed by Abbie Foxton)

This cut-n-paste political zine is a quick, yet cogent read. While we love the diversity of subjects covered in the small press, we are getting a bit fatigued reading zines about Taylor Swift or Game of Thrones; zines which seem to want to create an artificial division from material and political realities. Some of the topics briefly canvassed in this issue include: The Black Lives Matter movement, police brutality, the US drone program, and global warming. This zine is a bit of a throwback to the 90’s, (and we mean that as a compliment), in that it isn’t trying to offer a counterpoint to dominant ideology, instead it offers a more truthful way of seeing things. As this zine reminds us, “politics” isn’t a hobby, or interest like, food, fashion or music. Political structures and duelling systems of oppression condition our lives from cradle to grave. Can’t wait to read the next issue of New Hearts New Bones. (Reviewed by JC)

I wondered what a small book was doing in my zine pile, it seemed to break the rules a little until I researched the lineage. Quitter: Good Luck Not Dying is the compiled work of zine author Trace Ramsey. Trace wrote and compiled Quitter. A zine from way back in 2005, squeezing them altogether into this bound gem in 2008 and again in 2014. It is very much worth many editions until every lit fiend on the planet gets their peeps on a copy. This is raw thoughts from someone who sees through the smokes and mirrors. Each chapter is a short essay on what is happening in his world. Moments from his youth, lost moments, working for the man and the toll it zaps from your body and psyche. It runs in and out of socio-economic scenarios and the perceptions on the working class, his and what others see. It deals with those moments of poverty, desperation and why striving to be something that there are far too many of, is a waste of time. Trace is into quitting big time, but in so doing becomes a winner. There is a beautiful, witty level headiness that starts your motor with emphatic nods of knowing “Yes, we are made for more than this…” the future isn’t looking the brightest. This zine is available through Pioneers Press. (Reviewed by Abbie Foxton)

Strong paper quality often catches my attention. Curse of the printer’s daughter. Sometimes this can undermine, take over the content inside. This is designed beautifully, a real eye capture. The little ‘hello’ story introducing Issue two of Undertow magazine, quashes my fear. A strong do-it-yourself mentality has been cemented into the rib cage of Undertow’s editorial team. Most people would go to the hospital to complete the second stage of a serious bone break, but hey, go figure. The back shed, your dad and a rusty saw is just as good. Subdued colours, photographs accompanying a handful of articles covering music, art and the everyday flicks in my hand all glossy and stiff.

First, highlight is local Tassie artist Calypso Brown, her Soundcloud releases in my ears. Strong and elegant voice taking electronic steps, discovering her possibilities, and what direction she wants to take next. Her track Hunting from Calypso released in June, mellows the air with sweet beats and played for pleasure. Field of Violets has acapella harmonies rounding throughout her exquisite range.

The journalism isn’t heavy, they just let the artist take the wheel which can be dangerous if the interviewee is caught on a day when they haven’t got much to say. The key is to get them to chat, away from their speciality, what one wouldn’t expect them to talk about. Rather hear about the aphids on their morning roses, the salt on afternoon margaritas than how they write their music. There is more to Calypso Brown than the struggle, the boredom, where you traveled, the growth one experiences as a musician. I look forward to discovering more and meatier chats.

There’s a bit of collaborative art by Mish Meijers and Tricky Walsh. Their #dearministerforwoman photography packing some visual punch. It’s amazing what meaning a watermelon and makeshift wooden leg shackles can summon. Hobart Hackerspace is a community run place for ‘geek rebels’ with plenty of machinery to pull apart and share in new designs. They get loads of equipment donated by decommissioned radio and tv stations as well. A place of big ideas and contributions to scientific research. Looks like serious secret business to me.

I love Undertow’s mission. “The rise of individualism sees more and more people trying new things to improve their life, plug a hole or gain independence. This issue, we wanted to talk about all that stuff”. This may be an old issue, even a gem of a house up for rent has probably had it’s second tenancy, but as a time capsule of winter arts in one of the most wonderful states of Australia, you can see how brilliance develops in isolation. So, that’s issue 2, how does one get hold of more? (Reviewed by Abbie Foxton)

Username and Password
By Aggie Toppins
Half Size, 32pgs
halfletterpress.com

Username & Password is a zine that points to the absurdities of digital narrative experiences. It’s a brisk satire of online reality, particularly social networks, keyboard activism, and the endless data-mining of our experiences and opinions. Each page contains an often hilarious and completely on-point caption which provokes the reader to gently scrutinize many emerging digital norms, and quite possibly, their own behavior. The zine is exquisitely designed, and was a conversation starter in my house. Left on the coffee-table, it generated several interesting debates among friends. What more can you ask for? Highly recommended. (Reviewed by JC)