How did you first get involved with zines and diy culture? Do you remember some of the first zines you ever read?

I first got involved in zine culture in high school. I was really interested in punk music, studying and reading publications like Bomp!, Sniffin’ Glue, and Maximum Rock n’ Roll. I was fascinated that locals would create inter-community networks by writing reviews of their favorite bands. This sparked an idea for me to create my own zine, and my own publication, Ruthless, was born. I was only 16 at the time, and much of it revolved around making the cover art instead of the content. It wasn’t until two years later that I began covering art and activism in my hometown.

What are some current zines you are reading that deserve a shout out?

I pretty much love anything Joe Carlough (Displaced Snail Publications) and Katie Haegle (The La La Theory) do. Also, Minutes to Millenniums by Lauren Geiger has been one of my favorite series since the then 16-year-old Lauren Geiger gave me a copy at the first Scranton Zine Fest seven years ago. 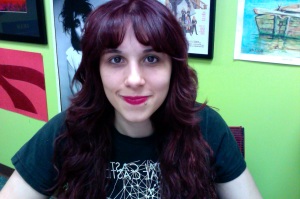 How did you start the Scranton Zine Fest? Can you briefly walk us through conceptualizing of the event? What were some of the principle obstacles in getting it off the ground?

Once I turned 18, I put together my first event called Ladyfest. It was originally started in 2000 by Bratmobile members Alison Wolfe and Molly Neuman. Since I was listening to a lot of riot grrrl music at the time, I was inspired to create my own Ladyfest as it was hosted in several part of the world at that point. From there, I had to decide if I was going to do Ladyfest II the following year, or something different. That same fall, I had just visited the Philly Zine Fest. With the sense of community, and love for writing and art, that festival encouraged me to create the Scranton Zinefest. I wanted to bring something to my town that hadn’t been done before or focused on. When I was first starting, it was a challenge for my town to create a culture of understanding of what exactly a zine was. Sometimes when people are unsure of what an event is all about, they’ll dismiss it completely, so attendance the first year was a little bit of an issue. Back in those days, MySpace was still more prominent and advising on there or by traditional means of hanging flyers, passing out postcards, getting local newspaper interviews and ads were pretty much the only ways we got the word out, aside from word of mouth.

The first festival was also not in the most obvious spot. We had it in an alley by a coffee shop, hoping that the shop could provide easy access to food for the vendors and public, but that also seemed to backfire. The coffee shop had seemingly been unaware of the event, even though I personally talked to the owner, and they did not have enough food or selections that day because of it. The festival was a little hard to find it you weren’t local. I soon learned how important signage would be to a festival. Weather would also be an issue for us, being that it was outside and Scranton weather is super unpredictable. It could be sunny all day and then a burst of rain could come out of nowhere. This scared off some of the applicants who, at that time, were on an honors system to pay for their table at the festival. This created even more problems when we had a couple of empty tables that I prepaid for would the hopes that the participant would show up. Many, many, lessons learned since the first fest, and the technology is so much better!

Scranton is now in it’s 8th year, and you have a lot of experience organizing a well attended and regarded event. What pieces of advice would you give to your younger self or someone just starting out who wants to mount a small press community event?

Start early and build a team. Put out a call for volunteers, and after meeting, and determining their passions and strengths, delegate responsibilities as early as possible. It’s almost like a chain of command. First, a date, time, and location must be decided. Then, the artwork and overall look needs to be created for a multitude of things: your flyer/handbill, website, program, any additional signage, etc. Working with a group of volunteers, have one take over social media and website responsibilities, have another be in charge of applications and table reservation payments, have another coordinate table rental (if the venue doesn’t provide it), and so on and so forth. It’s important to start a few months out getting the word around and giving your volunteers enough time to accomplish tasks, and regroup weekly or bi-weekly. Write and call local news outlets. Have a street team that distributes flyers in the surrounding towns. Keep records of your expenses and revenue. It’s all about months of planning, discussions, and follow through.

How did you publicize your fest? How did you get the word out, particularly in the first few years?

In the first few years, we mainly just had MySpace to work with as a “website” and people signed up via email. We created flyers, and of course, still do, plastering Scranton and the surround areas, answered newspaper interviews, and hoped people would spread the word to other zinesters. Almost ten years ago, it was a lot harder to accomplish widespread marketing if you were only a couple of friends trying to create a festival with little to no budget. Applying for grants, creating benefit shows, and accepting donations online, really helped our efforts to market as years went on.

Has the local arts community, or the international zine community been helpful in supporting Scranton Zine Fest?

Our local arts community is mainly filled with traditional artists (painters, sculptures, photographers, etc.) and writers, so this very much intrigued the area to see a showcase of graphic arts media. I think overall, our veteran applicants are some of the most supportive people. They’re constantly bringing in friends and new faces to our event. Also, I recently created a Zine Fest Organizer’s group on Facebook, and that has nearly 300 people in it (just starting a few months ago), and it’s been so helpful asking questions to other organizers, getting feedback, seeing how they choose to plan and publicize their event, and more. I think that has been the most supportive for me personally.

Did you do fundraising events?

Yes, we try to hold a benefit every year. Local bands volunteer and we charge a small cover to get into the show. This has helped a lot with venue costs especially. We’ve also applied for art grants and used online fundraising websites to help defer the costs.

What’s next for the Scranton Zine fest? We heard that you were also planning on starting a zine fair in Ithaca?

The next year’s festival will be on Friday June 1, 2018 at The Leonard in Scranton. We’re very excited about this venue because it’s on a very popular street, close to restaurants, bars, stores, and general foot traffic. I did set to plan a zine fest in Ithaca, but I soon got overwhelmed with some personal issues and had to leave it for another day. I’m not certain if I will return to the idea or not, but Scranton Zinefest is my main focus right now.